I’ve been working on my surname line for a while but have struck a brick wall at my 2x great grandfather, George Leslie.

While I’m confident I have accurately documented George’s adult life – certainly from his marriage in 1857 — information about his parentage and early life is sparse and less certain.

One of the great things about Scotland’s statutory records is that details of parentage are generally included on marriage and death records, as well as (more obviously) those of births. Oh what joy when the information on these sources is present and consistent!

Unfortunately, when George died in 1902, his son (also George), reported his grandparents by surname only – both Leslie — and both deceased.

The only record I have then which names George’s parents is that of his marriage to my gg grandmother, Janet Traill. They are named as John Leslie and Elizabeth Robertson. John’s occupation is shown as flax dresser, and the record indicates that both parents’ were alive at the time.

Without corroborating evidence, I had to assume that the names on the marriage record were largely correct in order to search for traces of George’s birth and early life.

George’s age at death was shown as 70, which would have made his birth year 1832. However, this is inconsistent with other records, including his marriage and census returns.  George’s age may have varied across records, but he consistently reported his place of birth (in census records) as Elgin, in Morayshire.

I used both FamilySearch and Scotland’s People; and searched for children named George Leslie (or Robertson) – born between 1810 and 1840 – where the father’s name was John and the mother’s Elizabeth.

I allowed for name variations and misspellings with wildcard searching, and in Scotland’s People, searched both OPR (Church of Scotland) records, and those of other churches.

Ultimately, three records were returned – two in Morayshire, and one in neighbouring Banffshire.

I’m confident that the Rothes-born George is not my ancestor, for several reasons.

But here is where it gets a bit complicated.

I believe that the second and third records actually relate to the same person – and here’s why.

The August 4th baptism took place in the Episcopal church of St John at Portsoy in Banff. These records aren’t available through Scotland’s People, and I found this on FamilySearch.

The records of the St John’s Church in Portsoy are held at the University of Aberdeen, so I emailed the Special Collections Librarian who kindly photographed and sent me the appropriate extract of the birth register. Copyright conditions mean I can’t publish this photo, but I can transcribe it. The extract reads:

The baptism register from the Church of Scotland kirk at New Spynie  reads:

The case for one George, two baptisms

As I noted above, my search had quite wide parameters, yet returned only three hits across a 30 year period – and two of those births were in the same week in 1822.

Before statutory records, the Church of Scotland was the “official” keeper of BDM records. Parishes were also responsible for poor relief (welfare). I have found several instances of children being baptised in the parishes of both parents. I think this was a kind of insurance, so that if poor relief was ever required, the child was “of the parish” and therefore eligible. I think it likely that this child was baptised the second time in New Spynie, in the Church of Scotland, for those reasons.

I am though at a loss as to why the kirk at New Spynie was chosen for a second baptism, when the Portsoy extract says that the mother, Betty Robertson, was from Forres — another parish in Morayshire.

It is of course one thing to argue that the same George Leslie was baptised twice; another to argue that this child was my 2x great grandfather. I think that there is some support for that hypothesis:

As always, I have more questions than answers: why New Spynie? Why the Episcopal church? Was John a member of the congregation? Or perhaps his employer Capt. Cameron was.  Who was Capt. Cameron? Was Betty Cameron also a servant of the Captain’s? What happened to John Leslie and Elizabeth Robertson after the birth of their son?

I’ve been working on this for a while and am beginning to feel that I wouldn’t recognise resolution if it danced naked in front of me. So I’m turning to you my blogging whanau. Any thoughts on my logic (or lack of)? Suggestions for further research? 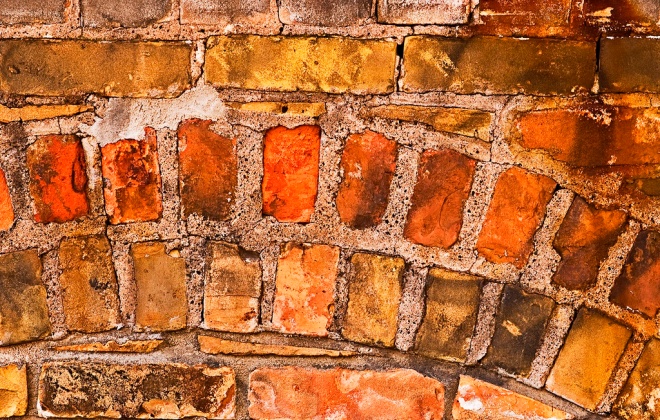 I seem to have hit a lot of brick walls lately.

I’ve been working on several branches of my tree and am becoming more confused by the minute. In particular, my 2x great grandfather George Leslie, and his parents John Leslie and Elizabeth Robertson are proving to be – in Churchill’s words – “…a riddle, wrapped in a mystery, inside an enigma.”

Let me explain and perhaps – my wonderful blogging whanau – you can see what I cannot — or have knowledge I lack.

I believe John Leslie and Elizabeth Robertson to be the parents of “my” George Leslie,  based originally on George’s marriage record shown below.

It was normal in those days for women to have their maiden name recorded on official documents in Scotland, which is incredibly helpful in researching maternal lines. The document also indicated that John and Elizabeth were still alive in 1857; as otherwise “deceased” would have been written after their names.

Normally Scottish death records also show parents’ names, but in George’s case it shows only surnames, and that both parents were by then deceased. The informant of George’s death was his son, also called George. It seems likely that if he didn’t know his grandparents’ names, he may not have actually known them.

George’s age on his death record was given as 70; which would have put his birth around 1831-32. His age on the marriage record in 1857 was given as 30; which would meant he was born around 1826-27. In the 1901 census, George’s age was given as 74. In the 1891 census, as 65; and the 1881 census as 53. It’s not unusual for ages to vary like this in nineteenth century census records – or even on statutory BDM records. These things are a guide, not gospel. However, on all but one census record I found for George, he gave birthplace as Elgin, in Morayshire.  The exceptions are 1851 and 1871 where I haven’t been able to find a record of him; and 1841 where his birthplace was shown as “out of county”.

With these parameters, I searched for a birth record – or more accurately a baptism record – using FamilySearch and Ancestry.

What I got were two baptism records for a George Leslie whose parents were John Leslie and Elizabeth Robertson – both for the month of August, 1822.

The first was in New Spynie, Morayshire, with a birth date of 3 August, and baptism on 31 August; the second in Portsoy, Banff, with a baptism date of 4 August. The New Spynie baptism was in the parish church, and so I was able to get a copy of the actual record from Scotland’s People.

Natural son means that John Leslie and Elizabeth Robertson weren’t married – at least not to each other.

The Portsoy baptism was in the Episcopal Church, so I haven’t yet accessed the actual record – but the entry on Ancestry says: 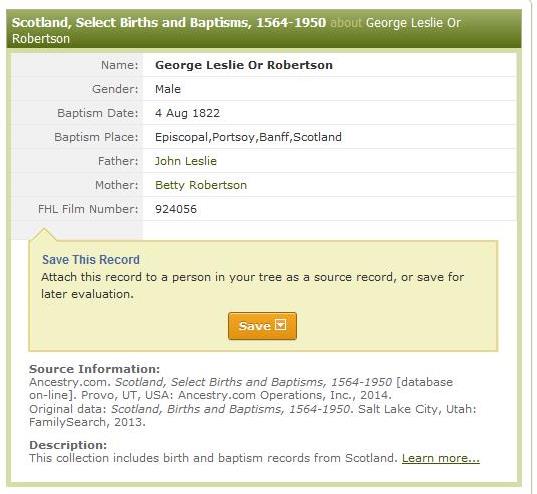 The parish of New Spynie is about  2 miles from Elgin which George consistently claimed on census records was his birthplace. Because of that, it seems reasonable to believe that this record is for the right person. A little bit of extra support comes from the 1841 census, which shows a George Leslie aged 15, agricultural labourer, living with his mother Elizabeth Robertson (age 45), in Bishopsmill – the main village in the New Spynie Parish. George’s birthplace is shown as “out of county”. This census record is the only one I’ve found for a George Leslie of about the right age living with another person that I can link to “my” George.

Portsoy is about only 27 miles from Elgin, though it is in the county of Banff, not Moray. When I first found the 1841 census record, I did wonder about the entry for George’s birthplace, but in light of the two baptism records, I’m beginning to construct a new scenario for George’s early life.

Elizabeth Robertson and John Leslie have a son together, born in Portsoy, Banff, on (probably) 3 August 1822. They are not married to each other. They name the child George and have him baptised the day after his birth in the Episcopal Church in Portsoy. Sometime in the following weeks, the couple – or perhaps only Elizabeth – travel to Bishopsmill in New Spynie Parish and have the baby baptised again in a Church of Scotland Church.

I don’t know a great deal about the Episcopal Church in Scotland, other than it had been associated with the Jacobite movement and that until the early nineteenth century, Episcopalians in Scotland suffered considerable religious discrimination. The north-east of Scotland – where George was born – was considered something of a Episcopal stronghold. Prior to the introduction of statutory birth, death and marriage records in Scotland in the 1850s, churches – in particularly the Church of Scotland – were the principal record-keeper, so it may have been that George’s second baptism was a way of ensuring that his birth was “properly” recorded.

Because OPR records have very little information compared to statutory BDM records, I’m a bit stuck. I have searched Ancestry and FamilySearch for birth, marriage and death records for any likely candidates for George’s parents, but both names are quite common and no records really leap out at me.

The only clues I have to Elizabeth’s identity are her age and birthplace in the 1841 census, but as ages tended to be rounded and birthplace was confined to “in county” or “not in county”, they aren’t exactly strong clues. John Leslie is even more of a mystery.

I suppose a first step is to establish if my multiple baptism theory holds water. Are any of you knowledgeable about the Episcopal Church in Scotland in the 1820s?

Secondly, I thought it might be useful to find out if the Kirk Session Minutes for New Spynie Parish in 1822 still exist. Because John and Elizabeth weren’t married, if one of both of them belonged to the Parish, it’s possible they were hauled before the Parish Council for a telling-off. Again, does anyone have any contacts with the local family history society that I might email?

Meantime, I’ll have to put aside George and his parents and see if I can have any more success with George’s wife’s family — the Traill’s of Auchtermuchty!

History of the General Register Office of Scotland (pdf)

Elizabeth Robertson, my 3x great grandmother exists in the birth record of her son, George Leslie, this census record and on George’s marriage record. I thought I had found other traces of her life, but I’m now sure that was a different Elizabeth.

Nowhere left to look, for now. 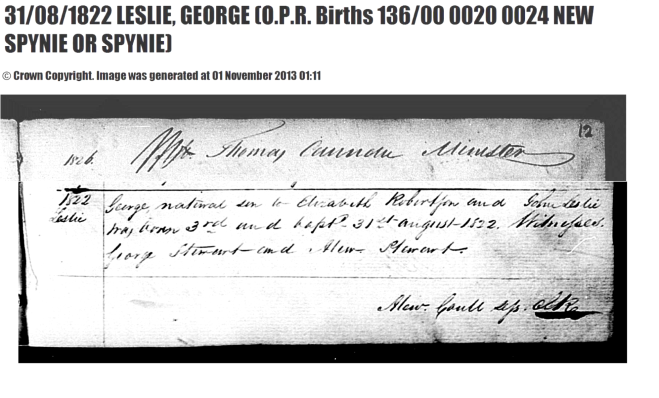 Wordless Wednesday is a blogging prompt from Geneabloggers.