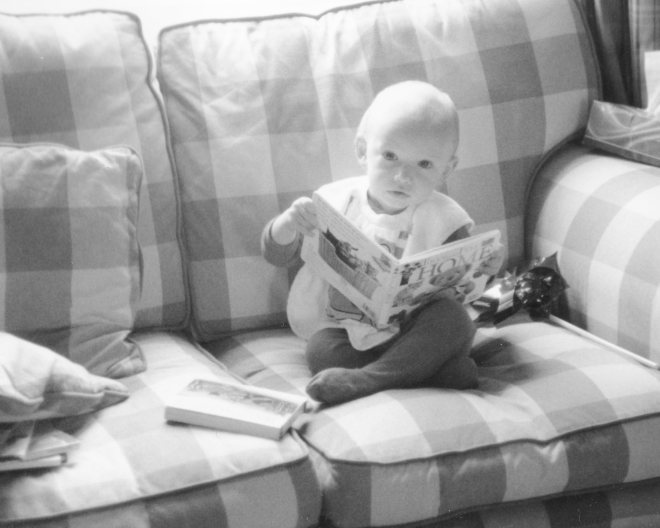 Books have always been part of the boy-child’s life. His father was reading The House at Pooh Corner to him while we were still in the maternity ward. 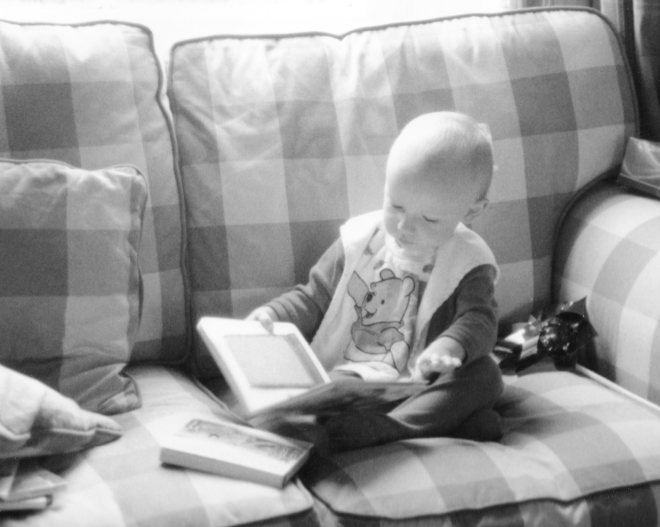 We discovered very early on that sharing a book with him – even just holding it and talking about the pictures – was enough to engage him. 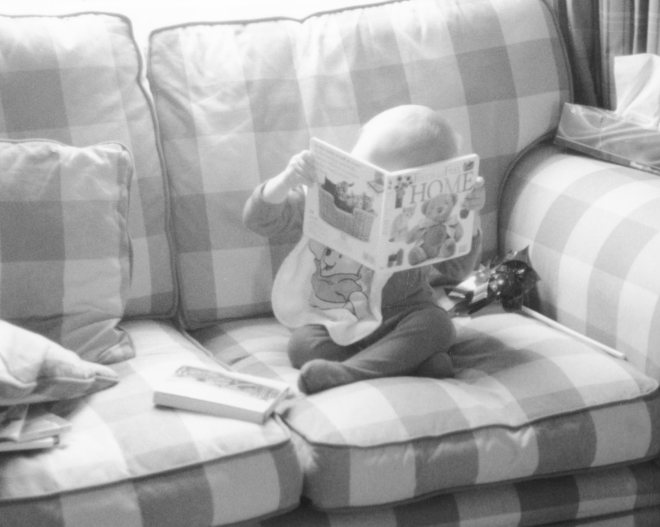 An epiphany at about five months; we handed him a book upside down and he turned it right way up. 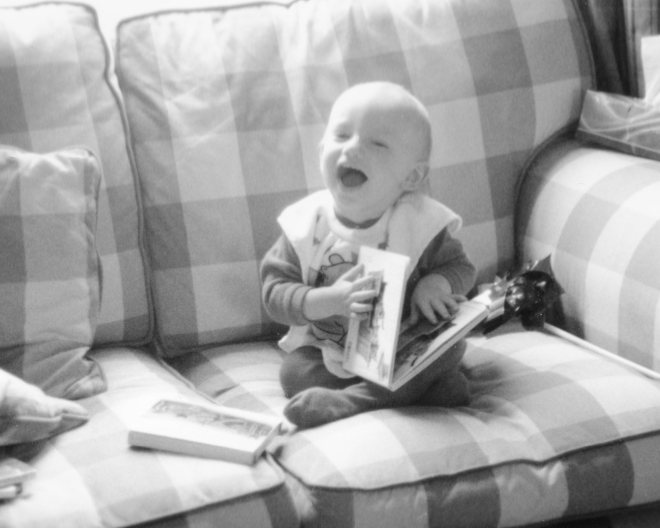 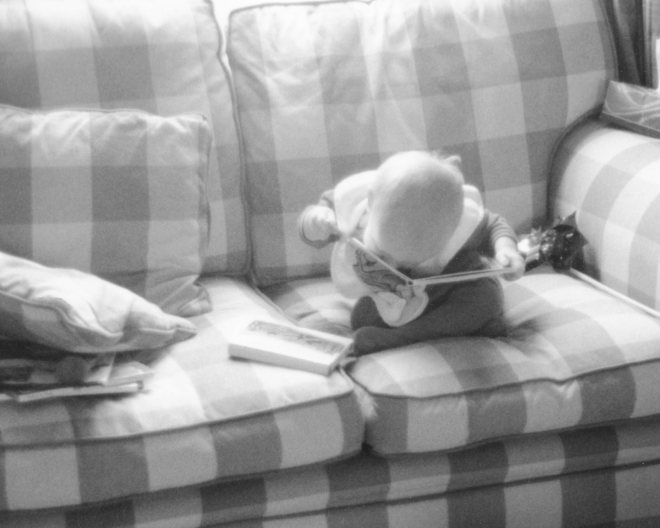 Adding a new dimension to the term “devouring a book.” 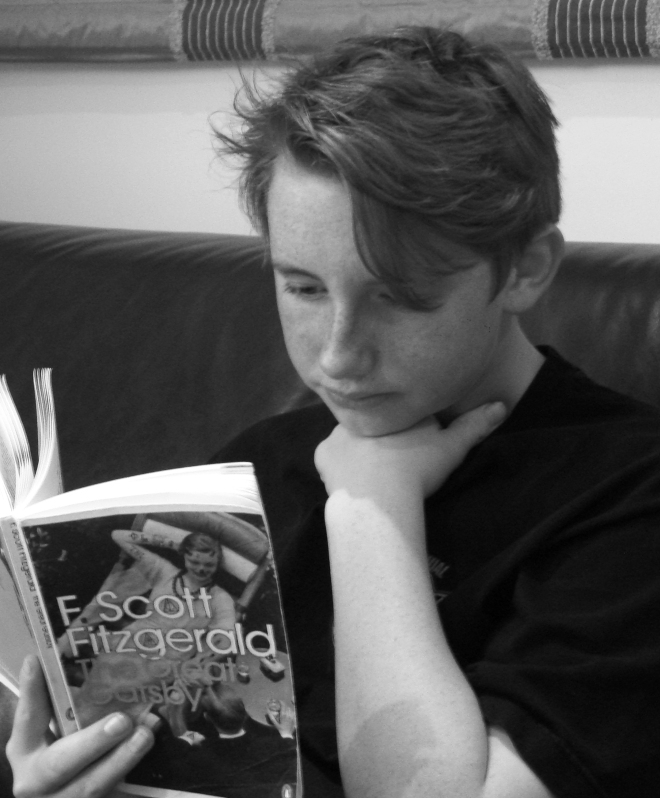 Not much has changed really. 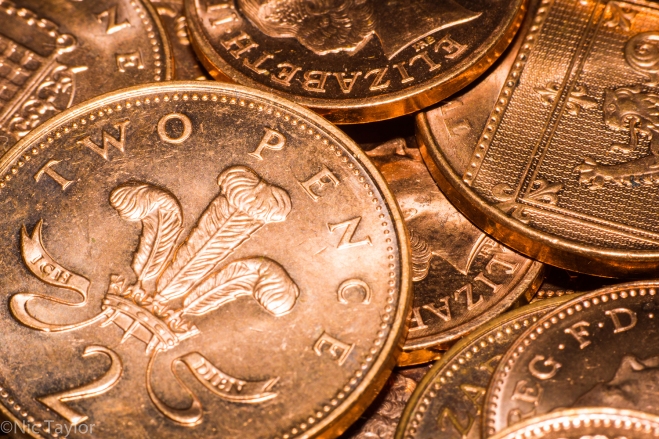 “Watching the pennies” was less a homily than a daily reality for so many of my forbears.
photo credit: N1CT4YL0R via photopin cc

Since last week’s post about my great grandfather David Leslie and the Kirkcaldy potteries, I’ve revisited the family tree and found more ancestors who were employed there.

Before her marriage, David’s wife, Isabella Gourlay worked as a  pottery dresser. The 1891 census shows that that most of Isabella’s household was similarly employed. Her mother,  Mary Gerrard was a pottery transferer; her brother Thomas a pottery painter and her youngest sister Mary also a pottery dresser. Only Isabella’s sister Elizabeth Gourlay was employed elsewhere – as a flax mill worker.

Mary was the head of the Gourlay household in 1891 – her husband Rankine Gourlay having been admitted to the Fife and Kinross Lunatic Asylum.  The income earned by Mary and her four oldest children was all the family would have had. It occurred to me when I was reading the census return that any problems in the pottery industry — or even in one particular company — would have hit this family particularly hard.

In those days before trade unions, pottery workers were generally employed on “piece rates” – that is paid according to their output, rather than by the hour. While this may seem reasonable, the employer set the rate and was able to change it without notice, reduce the amount of work they offered staff, or even terminate employment without the worker having any real recourse or rights. Labour was totally casualised, and any drop in orders could result in mass layoffs. For a family like the Gourlay’s that could have been disastrous.

The Methven mark placed on the objects produced at their Kirkcaldy pottery. Photo credit: beccagauldie.com

In 1893, there was a dispute at the Methven pottery — where I believe the Gourlay and Leslie families worked — over the rate being paid for a particular line of merchandise.  While it doesn’t seem that my ancestors were directly involved, reading about the case has provided me with some really useful information.

The dispute was settled in the Kirkcaldy Sherriff’s Court  with the average wages and working hours for pottery workers forming part of the evidence.

It seems that the for skilled job of manufacturing potteryware (jugs in the case that went to court), a worker was paid  around 23-24 shillings per week (the equivalent of about £106 in today’s money). This was for a working week of 60 hours.

I don’t know whether my ancestors’ jobs would have been considered to be as skilled as those making the objects, but if they were, it means that the family had a weekly income of — at most — around £4 12s per week from the potteries, plus whatever the daughter in the flax-mill earned.

Given that three of the four Gourlay pottery workers were female, it is likely that they were paid less than their male counterparts, so the above estimate could easily be a bit high. Even if it’s basically accurate, the calculator at  measuring worth. com puts their £4 12s weekly income at around £420 in today’s money.

Being in New Zealand, I’m not sure how easy it would be to feed, clothe and house a family of six on £420 a week, but I’m guessing they would not have been living in luxury.  And of course, before the NHS and welfare benefits (however miserly they seem now), any sickness or injuries would have been an enormous drain on the family finances; not only necessitating doctors bills and medicine but potentially leading to a loss of wages as well.

I’ve always known that I’m descended from mainly working class stock, but it’s not until I start collecting tangible evidence of their lives that I can begin to really appreciate how hard their lives really were. 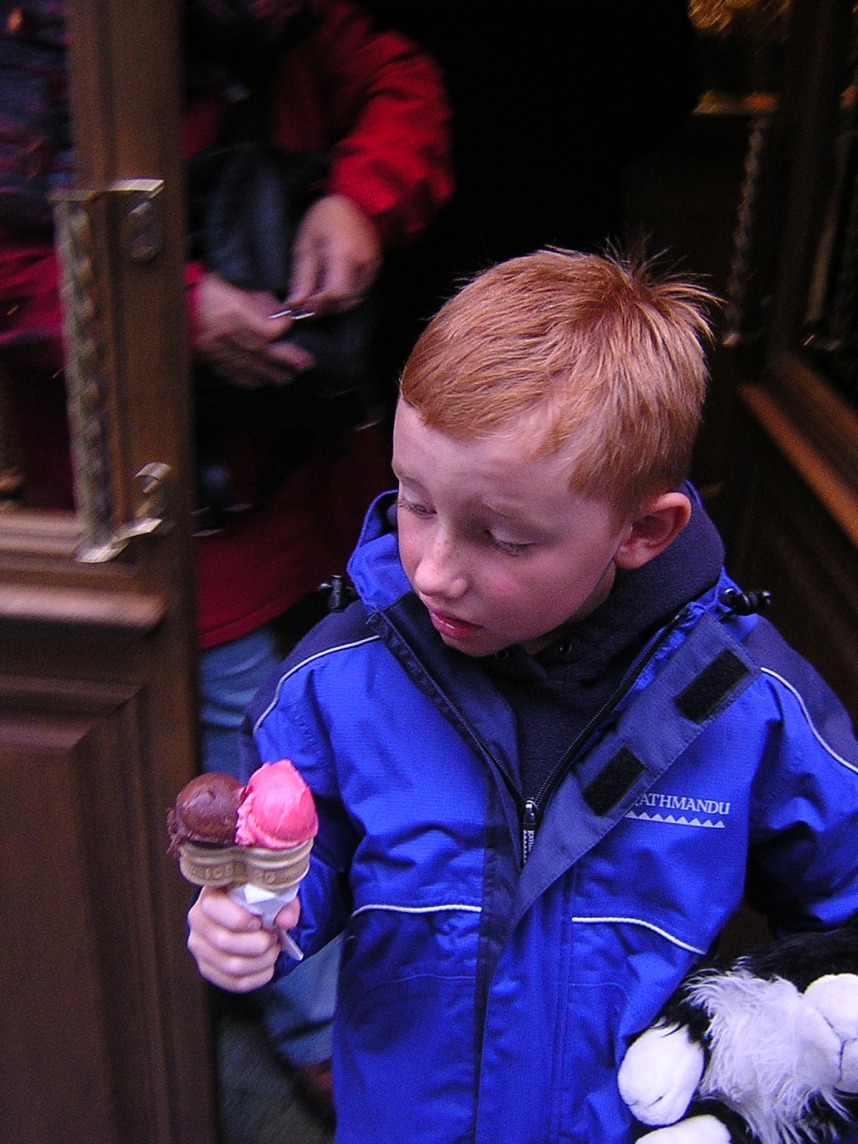 Thanks to Meg at Meg Travels for inspiring this with her great Paris postcard.

I’ve been researching my Leslie family roots a bit, and discovered that my great grandfather David Leslie, worked as a kilnsman in one of Kirkcaldy’s potteries.

It seems that most of my ancestors were working class – with many being involved in the flax and jute weaving industries, or working in Fife’s coal mines.

I knew vaguely that Kirkcaldy had potteries – my Cruden great grandparents lived in Pottery Street when I was a child (although at the time, I associated the name with pottering around – the way old people do) – but I didn’t realise until yesterday that Kirkcaldy was quite an important centre in the Scottish ceramics industry.

According to an extract from the Ordnance Gazetteer of Scotland: A Survey of Scottish Topography, Statistical, Biographical and Historical* (which has been scanned and is available online), in the 1880s, the potteries employed around 500 workers.  This is a relatively small number, compared to the weaving, coal and iron industries, but the town still sustained four separate potteries.

It’s likely that my great grandfather would have started work in the 1880s, probably when he turned 14. All subsequent records for him (marriage, census, death certificate) give his occupation as Kilnsman.

I don’t know which of the potteries he worked in, although I do know that the family lived around Links Street, at the southern end of town. The largest pottery was David Methven and Sons (Kirkcaldy Pottery) in Links Street, while the other three potteries were located around Dysart and Sinclairtown. It would make sense that he lived close to work (they rented their home so there were fewer barriers to moving), so I’m guessing he probably worked for Methven & Sons..

Aerial photo of Kirkcaldy, including David Methven & Sons pottery Photo from Britain from Above. http://www.britainfromabove.org.uk/image/spw027213

The Kirkcaldy Museum has exhibits relating to the potteries including photographs, so this is definitely somewhere to visit while I’m in the UK!

* Ordnance Gazetteer of Scotland: A Survey of Scottish Topography, Statistical, Biographical and Historical, edited by Francis H. Groome and originally published in parts by Thomas C. Jack, Grange Publishing Works, Edinburgh between 1882 and 1885. 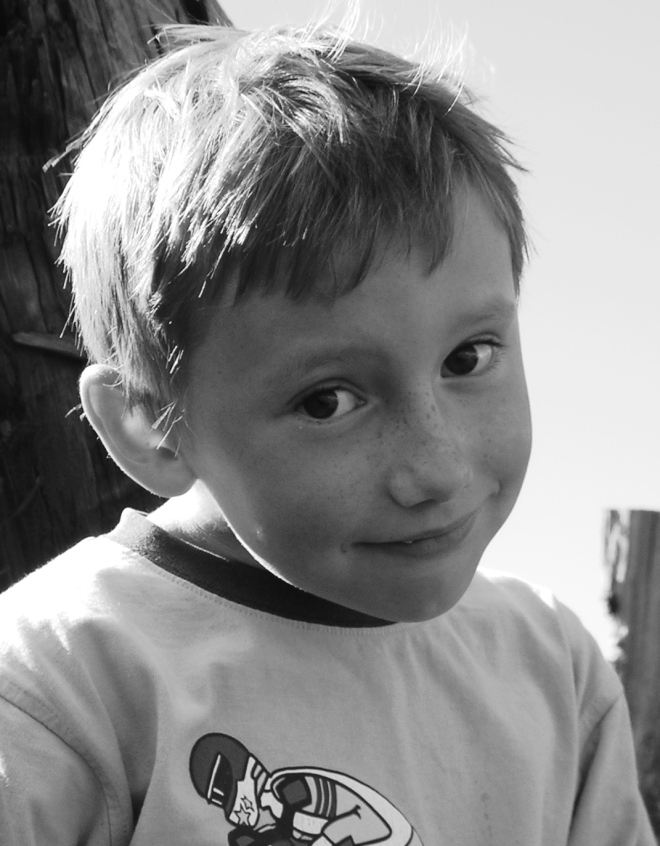 The boy-child aged about seven. He still does that look – just a bit more consciously now. I know this because it’s nearly the end of the school holidays and he hasn’t done much (any) of the revision he promised to do, but still has time to shoot video and go skating.

I hadn’t thought about it too much until recently, but I am definitely a family historian rather than a genealogist. While I’m interested in tracing and recording my lineage, I’m much more interested in understanding the lives my ancestors led and the societies that shaped them.

This realisation has come about in part because of a conversation I had with my dad a couple of days ago. It’s a major source of disappointment to him that, to date, none of his grandchildren have his surname. Although I’m not married – so still use the “family” name – my partner and I chose to give our son his surname rather than mine.

A rare Leslie family photo. My dad is on the left holding my brother. I’m seated on Uncle Tom’s knee. My favourite uncle ever, Tom Leslie was my grandfather David Leslie’s younger brother.

I also have two brothers. One of them changed his middle and surnames years ago so his three children don’t meet with Dad’s approval either. My other brother has recently adopted a child and my father was jubilant because he finally has a grandchild with the “right” name.

My relationship with my dad is prickly at the best of times, and I have to admit to feeling quite pissed off with him. He probably didn’t mean it, but it really sounded like his biological grandkids were somehow second-best because they won’t carry on “the name.” Our conversation reminded me that when I first talked to him after my son’s birth, he was decidedly sulky  over the naming of my baby.

I was wondering if that’s maybe why I haven’t made much of an effort to trace the Leslie branch of my family, so I went back to my family tree and noticed that it is 146 years today since the birth of my great grandfather David Leslie.

David Leslie was born on July 23td 1867 in Auchtermuchty, Fife, to George Leslie and Janet Trail (who sometimes appears in the records as Jessie, and with her surname sometimes shown as Traill or Jrail).

David appears to have been the fifth of seven children born to George and Jessie, although it seems that Jessie also bore a daughter, Christina Trail, the year before her marriage to George.

The 1871 census shows the family living in Auchtermuchty, with Jessie as the head of the household.

I found this record a while ago, and had assumed that George must have died. Since then however, I’ve found his death certificate – dated 1902. George also appears alongside Jessie in all the subsequent census records up until his death.

A search on Scotland’s People shows sixteen people called George Leslie in the 1871 census, and given what I know about George, six of these are possible matches. At the moment, I’m not keen to use up credits trying to find him, so until I can get to the library and use Ancestry, his whereabouts on census night will have to remain a mystery.

By the 1881 census, the family had moved to Kirkcaldy. The family consisted of George and Jessie, plus Jessie’s daughter Christina, George jr. William, Elizabeth, Isabella, David, John and Jessie jr. The three younger children were all at school, though it’s likely that my great grandfather would have left at fourteen to go to work. George seems to have spent his working life as a labourer.

By the 1891 census, David was working in one of Kirkcaldy’s potteries as a kilnsman. This is the occupation also shown on the extract of his marriage certificate in 1892, when he married Isabella Gourlay. David’s mother Jessie was one of the witnesses to the marriage, along with Isabella’s brother Thomas Gourlay. I know that Isabella’s father Rankine Gourlay would not have been at the wedding, as he was a patient at the Fife and Kinross Lunatic Asylum at the time.

David and Isabella had six children; my grandfather David being the fourth.

David Leslie sr. died in 1940 when my father was eight years old. My great grandmother Isabella died in February 1961, just months before I was born.

As always, the more information I have about ancestors, the more I want to know. But I can’t say that I am any more interested in the Leslie family than any other branch of my tree. I do want to know why George wasn’t at home on census night 1871, and I’d like to know when he made the move from Elgin to Dundee. I’m curious about whether he had siblings and who his parents were, but I’m not driven by any need to prove some sort of lineage. My research will, I think, always be guided by how interesting I think characters are and how much I can learn about their stories.

I can’t help thinking my dad would probably disapprove of this too. 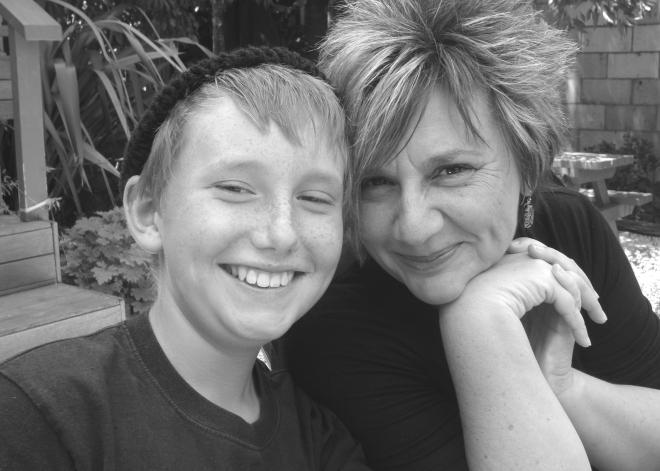 Not sure how much longer I’ll be able to refer to him as the boy-child.