Catherine Black and Alexander Cruden with children Stewart and Margaret. Circa 1912.

My christening; four generations of strong women. My mother, grandmother, great-grandmother and – as it turns out – me. 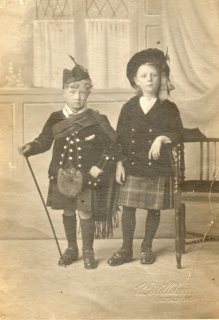 My grandmother, Margaret Cruden and her brother Stewart. Studio portrait probably from around 1914.

My baby brother and I with our Mum, grandmother and great grandparents

Inspired by Lisa Alzo at the Accidental Genealogist, I’ve decided (belatedly) to acknowledge some of the fearless females in my family, and where better to start than with my gran; Margaret Cruden.

While I had two grandads when I was little, I’ve only ever known one grandmother  – my mum’s mother.

One way or another, I’ve written about her quite a lot in this blog and other places and she’s the ancestor of whom I have the largest number of photos. So here they are, along with a wee bit of biography.

Margaret Simpson Bisset Cruden (11 May 1908 – 1 May 2006) was the eldest child, and only daughter of Alexander Cruden and Catherine Simpson Bisset Black. My great grandparents were very young when she was born; Great Gran was 18, Great Grandad still 17. Margaret had four younger brothers; Stewart, Alexander, James and George, the youngest of whom was born just a few months before Margaret herself became a mother.

Margaret was born and raised in Dysart, Fife, and lived all her life in Dysart and Kirkcaldy. She married my grandad (David Ramsay) in 1927, when Grandad was 25 and she was 18. Grandad was a coal miner.

They raised six children; a son David, and five daughters – Catherine, May, Margaret, Elizabeth (my mum) and Sandra.

After my grandad died in 1973, my grandmother left the UK for the first (but not the last) time. She travelled to New Zealand to visit my family and to Australia to see her brother Alexander and his family. During the next thiry years she travelled again to Australia, to Zimbabwe while it was still Rhodesia and in the midst of civil war, and to Switzerland to see my cousin. She also travelled around the UK visiting family.

I only really got to know my gran in my late twenties and thirties while I was living in the UK. We spent hours together drinking tea and gossiping. She was quick-witted,  a good story teller and could be very funny.

I’m glad she got to meet my son before she died, even though he was only a toddler and barely remembers her. I’m sad that she died two months before we were due to go back to the UK for a visit. My son was eight by then and would certainly have remembered that encounter with his feisty, fearless, four foot ten great gran.

Finally found my first ancestor from the 18th century. The 1851 census record from Scotland’s People shows that my 4x great grandfather, James Todd, was living in Country Road, Dysart, Fife with his widowed daughter, Mary Todd (my 3x great grandmother), along with eight of the nine children Mary bore to husband Alexander Nicholson.

It looks like James Todd was born in 1777 in Dysart. That means that I’ve had family living continuously in the same place for over 230 years.

Alexander Nicholson was also born in Dysart, so it will be interesting to see how firmly I am rooted in that place.

My grandfather and my son – spot the resemblance?

Family resemblance is a very slippery thing. People I know who were adopted have reported being told how much they looked like their adoptive parents or siblings, and even within biological families there are always arguments about who someone “takes after.”

When my son was a baby, I thought he looked like me and in fact, people used to describe him as a “mini-me”. Later, I could see both of my brothers in him, but the general consensus lately has been that he’s really, really like his dad.

So I have to say that I was a bit stunned when I looked at the photo of my grandad as a young man, and all I could see was Tom. It’s there in the eyes, the cupid bow lips – and especially in the nose. I’ve always thought my siblings and I got our features from mum’s mother’s family, but perhaps not.

My grandmother always used to say that Tom was like his great grandad – and that was where he got his auburn hair. But since my partner also has auburn hair, I tended to dismiss everything my gran said as at best, a bit misguided. But I was wrong, and I wish I could apologise to her.

I guess I just shouldn’t try and work on the family history project late at night, but I’ve been busy with other things and was beginning to lose touch with what I’d already done. On top of that, my mum sent me more photos  and seeing faces always makes me want to know who the people are.

My grandfather David Ramsay (top right) with his parents and siblings.

This is the photo that led me to the place I’m now in … mired in too many questions and too much partial information that may be inaccurate, and generally feeling annoyed with myself for the very sloppy, gung-ho approach I’ve been taking to research. Basically, I’ve been so keen to know more and more that I haven’t documented my research well enough (highly embarrassing admission) and now I have so many bits of information and I’m not sure where I got them and it’s all a bloody mess!

This is the first time since I began this project that I actually feel dejected. END_OF_DOCUMENT_TOKEN_TO_BE_REPLACED

I’ve only been blogging regularly for the last couple of months, so I was surprised and delighted to open my emails this morning and find that I’ve been nominated for an Inspirational Blog Award.

My nomination comes from ‘How to Cross an Ocean’ (http://howtocrossanocean.wordpress.com/about/) – a brilliant blog which is charting day-by-day progress of four British women who are planning to row across the Pacific Ocean to raise awareness of ‘Oceans Project Georgia.’ They have taken on an amazing challenge and I wish them all the best. I’ll be following their progress.

The rules for accepting this Award are as follows:

– Display the award logo on your blog page.

– Link back to the person who nominated you.

– State 7 facts about yourself.

– Notify those bloggers of their nomination and the award’s requirements.

So here are seven facts about me: 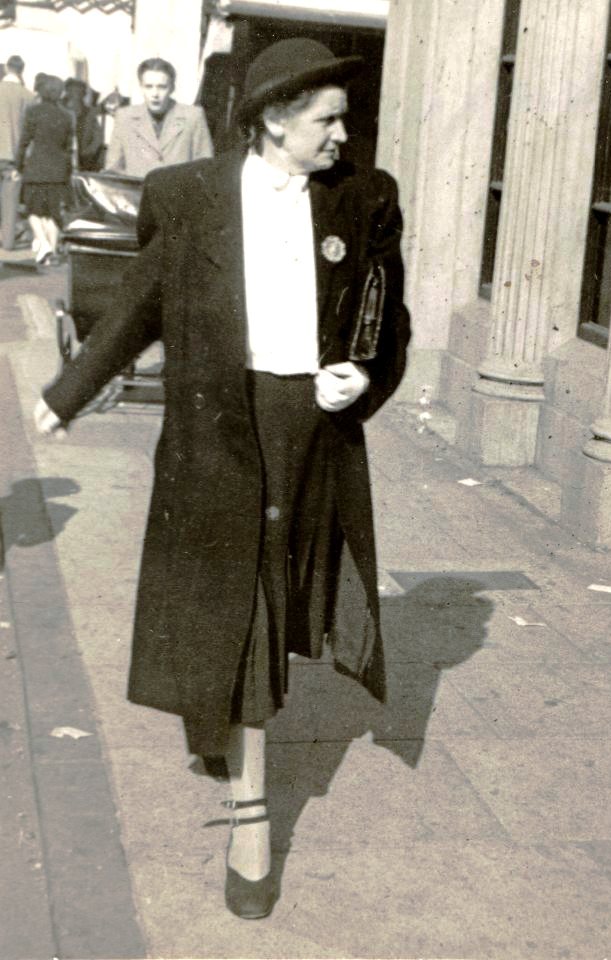 Susan Elder was my paternal grandmother, and the woman after whom I am named.

I know very little about my dad’s mum. He was only 17 when she died and I’ve never really asked him much about her, possibly because I’m not as close to him as I am to my mother, but also because I think I’ve always felt his sadness at her loss and I haven’t known how to ask.

I’ve always known I was named for her and until my mum gave me the photo above, the only picture I’d ever seen of my grandmother is this one, taken probably around 1914-15.

I’ love this photo. I love the tranquility and hopefulness of the three young faces. I know my great-grandmother had been a school teacher before she married, and I wonder if the book my grandmother is holding is somehow symbolic of the family’s love of learning – or perhaps a way of conveying gentility upon the children of a family whose father was “in trade.”

My grandmother was 22 when she married my grandfather in June 1923. On their marriage certificate, his occupation is given as “blacksmith”  – she apparently had none. In researching my family history, I’ve found very few female ancestors who did not have jobs at the time of their marriage, so I guess Susan’s family were sufficiently wealthy that she did not have to work in the mills and factories of Kirkcaldy.

My grandmother’s married life was not materially easy. She raised two sons in a tiny terrace house with an outside toilet, shared with three other families. Was she happy? I don’t know. I’ve spoken to an aunt and to one of my father’s cousins who remember her fondly, but I really don’t know what her life was like. I hope that when the photographer caught that image of a stern-looking woman with her head turned away from the camera that he was only capturing that moment – and that the beautiful, hopeful teenager of the second photo found happiness in her relatively short life.

My christening and four generations of strong women. My mother, grandmother, great-grandmother and – as it turns out – me.

While I’ve been on the subject of babies, christenings and naming ceremonies, I found these photos and wanted to include them. The photo above shows Katherine Black, Margaret Cruden and Elizabeth Ramsay – the maternal line that led to me (the cute one all wrapped up in white).

Looking back, it seems to me that the lives of these three women were not dissimilar, but very different to mine. My great-grandmother and grandmother both married at 18; my mother at 19. Katherine (great-grandmother) and Margaret (grandmother) were pregnant at the time of their marriages;  my mum had to wait four years for a child, and then my older brother was stillborn. Katherine raised five children, Margaret six, my mum three. Weirdly, both my great grandmother and grandmother had husbands with prosthetic legs. My great grandfather was wounded in WWI; my grandfather suffered from diabetes and lost both legs to gangrene.

I don’t know how much formal education my great grandmother or grandmother had, but I know my mum had to leave school at 15 because her father thought any more education would be wasted on a girl who “was only going to get married”, and besides, the family needed her wages. Until she married she was a weaver in Nairn’s linoleum factory in Kirkcaldy. On Katherine’s marriage certificate it says she was a housekeeper. My grandmother’s occupation on marriage was listed as shop assistant.

Although I also left school young (major rebellion at 16), I studied at night school to get University Entrance and have ended up with two post-graduate degrees. I have one child, born when I was 36 and have never married his father – though we’ve lived together for almost 22 years.

I look more and more like my maternal ancestors as I get older and feel a greater kinship with them then ever before, so perhaps the fact that my life has been so different to theirs says a little bit about the gains feminism has made –  at least for my generation. 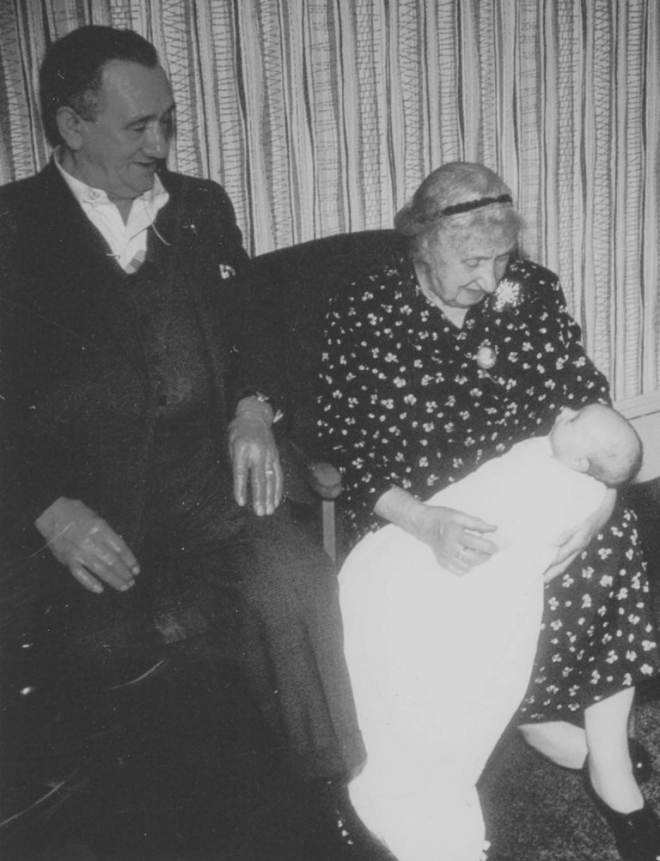 Alexander Cruden and Katherine (nee Black); my great grandparents with me at my christening.

Basically, I just love this one. I love the fact that I look so adoringly at the old woman holding me and that my great grandfather looks so lovingly at me. Admittedly, great gran looks a bit underwhelmed; but I guess by the time I came along, she was probably totally over babies . Who can blame her?

Flowers for the grave of Emily Keeling; shot to death in Auckland in 1886..

Well, it took me a the best part of a week to get back to Symonds Street Cemetary, but Emily’s grave now has flowers. They’re fabric, rather than “real” because I figured they will last longer (and because it’s impossible to buy fresh flowers in that neighbourhood on a Saturday afternoon), but I noticed that when I was there, a few more graves also had flowers laid on them. The cemetary is being tidied up by  a group serving community service sentences, and it looked a lot less overgrown than on my last visit. The group’s supervisor told me a few people had been in to bring flowers while they were there, so it’s nice to know that those long-dead Aucklanders are not totally forgotten.