Merle Wright, c. 1916-18 Photo kindly sent to us by a descendant of friends of the Wright family.

Like me, my partner has memories of knowing three of his four grandparents. In fact, he was in his teens when all three died. Yet, as seems universal with children, he learned little about them as people. So little in fact, that when I asked him once what his (paternal) grandparents were called, his reply was “er, Nana and Pop?”

That throwaway line was the beginning of a slow and rather tentative search. The first thing of course was to replace “Nana and Pop” with Merle Matilda Wright and Wallace Oliver Gray, who married on October 2nd, 1926 at St. John’s church Hororata, New Zealand.

The Wright and Gray families

Andrew Gray had arrived in New Zealand as a small child, aboard the ship Mataoka which docked at Lyttleton on December 2nd 1860. His parents, James Gray and Isabella Thompson travelled from England with three other children as well; the youngest only a few months old.

Emily Ann Oliver was the second child born to William Oliver and his wife Emily (maiden name unknown). Their first child, a son, was born and died aboard the ship Glentanner on the voyage from England to New Zealand. Emily Ann was the first of eight Oliver children to be born in New Zealand.

Andrew Gray and Emily Ann Oliver had seven other children together. 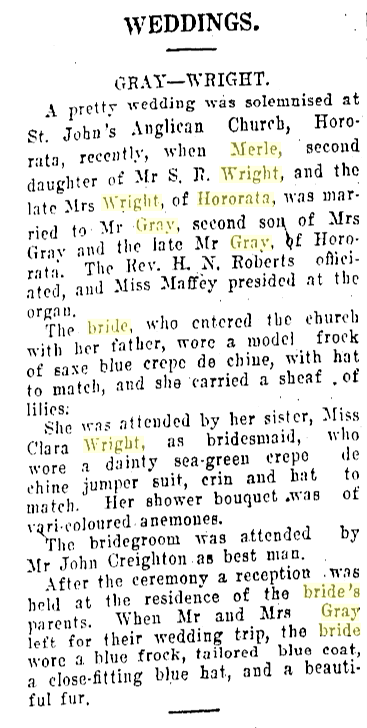 Eric Andrew Gray, born 1895. Also served with the NZ Expeditionary Force in France. He died 27 March 1918 during the Third Battle of the Somme. I’ve written about this here and here.

Ethel Fyllis Gray, born 1899. She married William O’Brien in 1920, in a double wedding with her sister Doris (see clipping below.)

Merle Matilda Laura Wright was born on 23 August 1904, to Sidney Robert Wright and Jessie Susan Harris. They married in 1890, in Timaru and had eight children together.

Both Sidney and Jessie had been born in New Zealand. I’ve written about this part of the family here. Since then I’ve learned more about the immigration of these families to New Zealand, so will cover this in a later post.

Their eldest child, Harry Marshall Wright, born 18 August 1891, was killed in action during WWI — on August 7th, 1915 in the Sari Bair offensive at Gallipoli.

Margaret Wright, born 1892, died only nine hours after her birth.

Like his brother Eric, and brothers-in-law Harry and Fred Wright, Wallace Gray served with the New Zealand Expeditionary Force in WWI. He was wounded in France, in December 1917 and evacuated to England. While there, he contracted a serious illness and was deemed unfit for military service.

Bringing the characters to life

While it is satisfying to add names and dates to the family tree, the real pleasure in researching Merle and Wallace’s lives has come from the rich detail provided by newspaper cuttings found in New Zealand’s online newspaper archive, Papers Past.

Merle Wright and Wallace Gray lived during a time when newspapers not only flourished, but devoted considerable column inches to reporting social events — in much the same way we use social media now. Weddings, bridal showers, birthday and coming-of-age parties; all sorts of social occasions were reported — often in rather flowery detail. From these, we have added depth to my partner’s knowledge, particularly of his grandmother.

We found a number of clippings recording her involvement in organising social events in Hororata prior to her marriage, while later we find numerous references to her golfing abilities — golf tournament results obviously being a regular column. 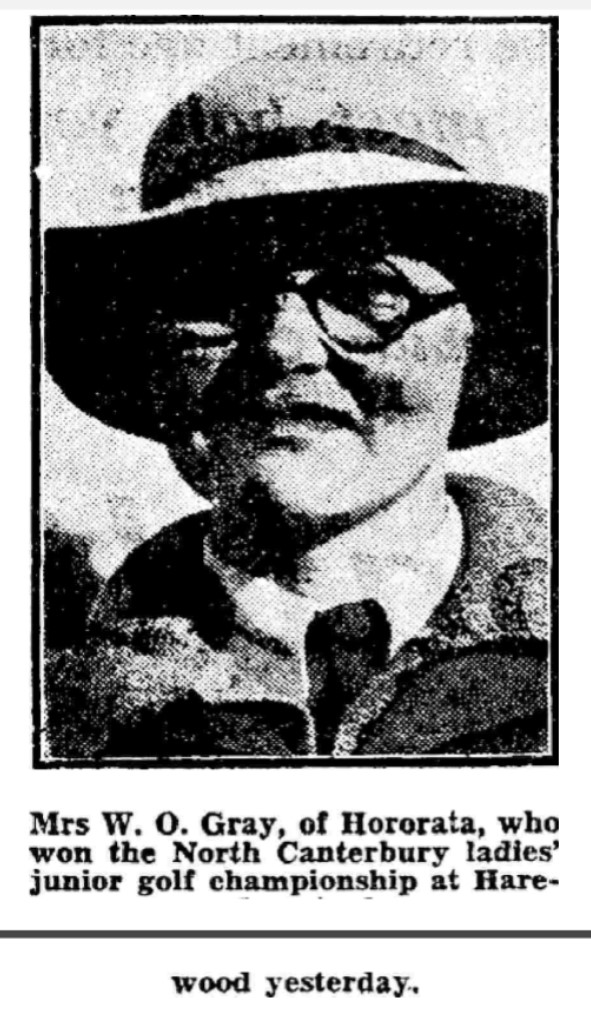 On a practical level, these stories have also helped identify new family members, narrow down search dates and confirm relationships between individuals. For example, from the newspaper report above, I know that Merle’s sister Clara wasn’t married at the time of Merle’s wedding, so I could confine my search for her marriage record to later dates.

It was common to list all of the attendees at social functions, so it becomes clear that courtship very much took place within the small community — these young men and women were very likely to marry the boy or girl “next door.” 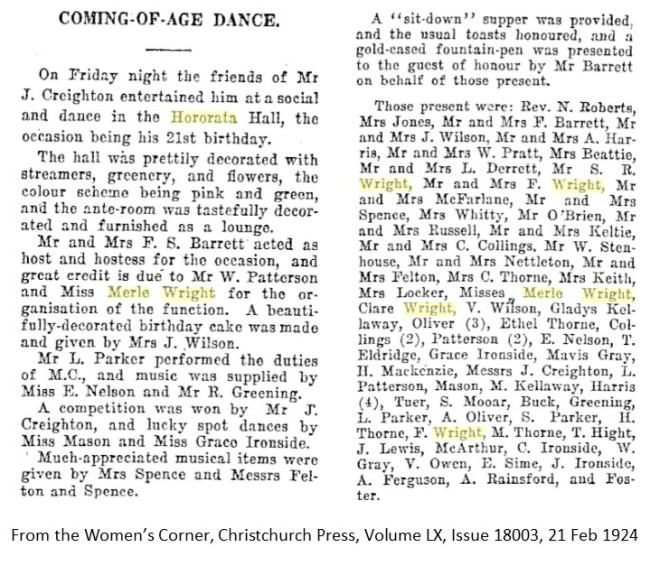 As well as members of the Wright family, this event was attended by Wallace Gray and his sister, and members of the Oliver family (cousins of the Gray’s). Image: Fairfax Media/ Papers Past.

When Wallace Gray married Merle Wright in 1926, they were already related by marriage. Wallace’s sister Doris had married Merle’s brother Fred in 1920, in a double wedding where another Gray sister, Ethel was also married.

The end of the (official) road

Merle died in 1979 and Wallace in 1981. They had raised three children together; Patricia, Shona and my father-in-law Roger. We know that Wallace ran the local garage in Hororata for many years and that during the 1950s the couple moved to Hamilton, then Auckland before finally settling in Timaru; electoral rolls and street directories help map their movements over the years.

But beyond that, public records have no more to offer.

When I set about answering that initial question about “Nana and Pop”, my partner had fairly limited interest in his family’s history. As I uncovered more and more — and particularly since finding Merle’s photograph in Papers Past — his interest and enthusiasm have grown. It is now time to visit the few remaining members of the family and ask the questions we didn’t even know we had.

It’s time to close the circle.

Killed in action during the Spring Offensive in the Somme Valley, France. 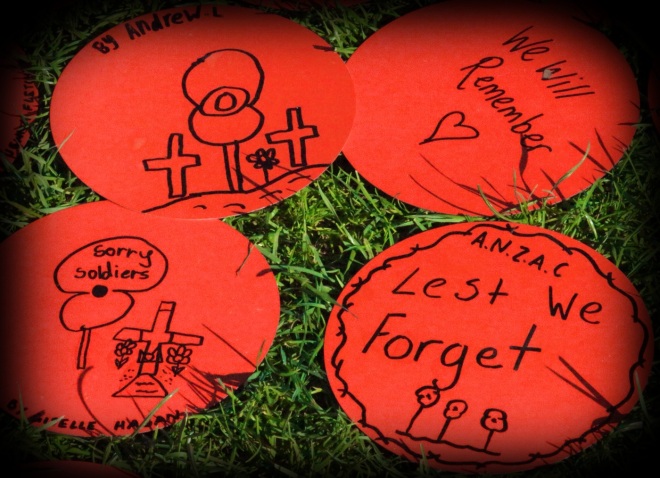 Hand-written cards of remembrance by Auckland school children. Thousands of these have been placed together to form the shape of a gigantic poppy on the field at Auckland Domain. Photo: Su Leslie, 2015.

Headstone of my paternal grandparents and older brother.

This is the only photo of a family headstone I have.

I haven’t yet begun scouring graveyards – mainly because I’m in New Zealand and pretty much all my family is buried in Scotland.

The big T, the boy-child and I did take a detour on a family holiday a few years ago to check out the cemetery at Hororata near Christchurch. We weren’t so much searching for the big T’s family, as idly wondering whether any of his ancestors were buried there. Without really knowing what we were looking for, I’m still not sure whether we found anything relevant. We certainly didn’t think to photograph any of the headstones, although we did take this photo of the church, which I quite like.

I have a particular fondness for monumental masonry, particularly from the nineteenth century where  those who could afford it managed to combine some truly elegant sculpture with some amazing euphemisms for death.

I’m looking forward to learning more about my ancestors from the memorial inscriptions their loved ones gave them; and hopefully will come back from the UK in a few weeks with some more photos to add to my tree.