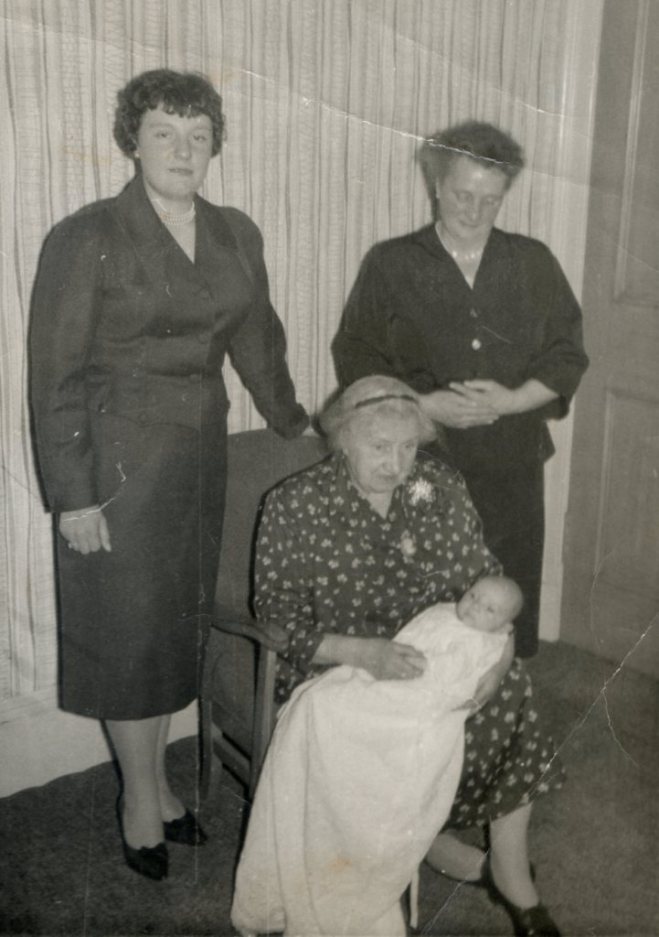 My christening and four generations of strong women. My mother, grandmother, great-grandmother and – as it turns out – me.

While I’ve been on the subject of babies, christenings and naming ceremonies, I found these photos and wanted to include them. The photo above shows Katherine Black, Margaret Cruden and Elizabeth Ramsay – the maternal line that led to me (the cute one all wrapped up in white).

Looking back, it seems to me that the lives of these three women were not dissimilar, but very different to mine. My great-grandmother and grandmother both married at 18; my mother at 19. Katherine (great-grandmother) and Margaret (grandmother) were pregnant at the time of their marriages;  my mum had to wait four years for a child, and then my older brother was stillborn. Katherine raised five children, Margaret six, my mum three. Weirdly, both my great grandmother and grandmother had husbands with prosthetic legs. My great grandfather was wounded in WWI; my grandfather suffered from diabetes and lost both legs to gangrene.

I don’t know how much formal education my great grandmother or grandmother had, but I know my mum had to leave school at 15 because her father thought any more education would be wasted on a girl who “was only going to get married”, and besides, the family needed her wages. Until she married she was a weaver in Nairn’s linoleum factory in Kirkcaldy. On Katherine’s marriage certificate it says she was a housekeeper. My grandmother’s occupation on marriage was listed as shop assistant.

Although I also left school young (major rebellion at 16), I studied at night school to get University Entrance and have ended up with two post-graduate degrees. I have one child, born when I was 36 and have never married his father – though we’ve lived together for almost 22 years.

I look more and more like my maternal ancestors as I get older and feel a greater kinship with them then ever before, so perhaps the fact that my life has been so different to theirs says a little bit about the gains feminism has made –  at least for my generation.

Alexander Cruden and Katherine (nee Black); my great grandparents with me at my christening.

Basically, I just love this one. I love the fact that I look so adoringly at the old woman holding me and that my great grandfather looks so lovingly at me. Admittedly, great gran looks a bit underwhelmed; but I guess by the time I came along, she was probably totally over babies . Who can blame her?