Having exhausted the current research options for Helen Low, I thought I’d try to learn more about her husband, David Skinner Ramsay.

David was my 3x great grandfather, and also the namesake of my maternal grandfather of whom I have incredibly fond childhood memories.

As with Helen, I’ve begun at the end of David Ramsay’s life – on the basis that the more recent information is, the more comprehensive and often reliable it tends to be.

From the census records I found for Helen Low (When things aren’t quite what they seem … the pauper daughter of a colonial administrator?) , I know that David Ramsay was born in Dysart, Fife. On his marriage to Helen in 1836 he was recorded as living in Collessie Parish –also in Fife. The 1841 census recorded his occupation as agricultural labourer, so it is not unreasonable to assume that he left Dysart in search of work.

Collessie is about 15 miles north of Dysart. It is also only a few miles from Kettle – where it seems David’s mother Jean Skinner was born (this will be the subject of a separate post).

By 1841, David Ramsay and Helen Low had three children and were living in Strathmiglo. The transcription of that census puts the address as Pityomie, but looking at the original document and a parochial directory transcribed by the Fife Family History Society,  I’m inclined to think that actual address is Pitgornie or Pitgorno – especially as the parochial directory lists a farmer called James Christie Esq as living at Pittgorno, and an entry in the Farm Horse Tax Rolls for 1797-98 for the Parish of Strathmiglo shows James Christie of Pitgornie paying 6s/9d in tax for three liable horses.

Horse Tax Return, 1797-98, Parish of Strathmiglo. This shows James Christie esq. at Pitgornie. Is this the farm where David Ramsay was living and working in 1841? Source: Scotland’s Places.

Between 1841 and 1851, it seems that David Ramsey’s fortunes took a major turn for the better.

The 1851 census recorded him as being a Master Miller, living at Fargs Mill, Abernethy, Perth.

Fargs Mill (which has been called Ayton Farm since the late nineteenth century) appears on Ordnance Survey maps from the late eighteenth century. An archaeological survey commissioned in 2011 as a condition of developing the land, says that the mill was one of several on the river Farg, but does not make clear what was being milled – suggesting that there were flour and corn mills on the river, as well as a sawmill.

The census return also shows that David’s move from agricultural labourer to Master Miller brought with in an increase in wealth – the household in 1851 included two servants, one male (who may have worked in the mill) and one female, who may have been a housemaid.

Between the 1841 and 1851 censuses, David and Helen’s family had also grown by two more children – daughter Jean Skinner Ramsay (born 1843) and son William Ramsay (born 1846). Both children are recorded as having been born in Strathmiglo – suggesting that in 1851, David Ramsay had been working at Fargs mill for no more than 3-4 years.

In January 1852, David and Helen had another child – Helen, whose place of birth was recorded as Abernethy. Helen died on 1 May, 1857, aged five. Her cause of death was shown as scarlatina, or Scarlet Fever. The death record shows that David was no longer working as a Miller but as a Corn Merchant, and the family were living in Glenfoot – – a settlement to the east of Fargs Mill, towards Abernethy.

As Glenfoot was the family’s address in the 1861 census, I wondered when – and why – they had moved. The reason seems to be financial. On 9 April 1856 David Ramsay applied for a form of bankruptcy called cessio bonorum. I’d never heard of this, but it is a principle of Roman law that was adopted in Scotland:

Cessio bonorum (Latin for a surrender of goods), in Roman law, is a voluntary surrender of goods by a debtor to his creditors. It did not amount to a discharge unless the property ceded was sufficient for the purpose, but it secured the debtor from personal arrest. The creditors sold the goods as partial restoration of their claims. The procedure of Cessio Bonorum avoided infamy, and the debtor, though his after-acquired property might be proceeded against, could not be deprived of the bare necessaries of life. The main features of the Roman law of Cessio Bonorum were adopted in Scots law, and also in the French legal system.

From the Dundee, Perth and Cupar Advertiser, 7 March 1856. Source: British Newspaper Archive. Image © THE BRITISH LIBRARY BOARD. ALL RIGHTS RESERVED

A month later a notice appeared in the Dundee Perth and Cupar Advertiser letting Fargs Mill, cottage and surrounding land. Although the Ramsay family did not own Fargs Mill, they lost their home with David’s bankruptcy. 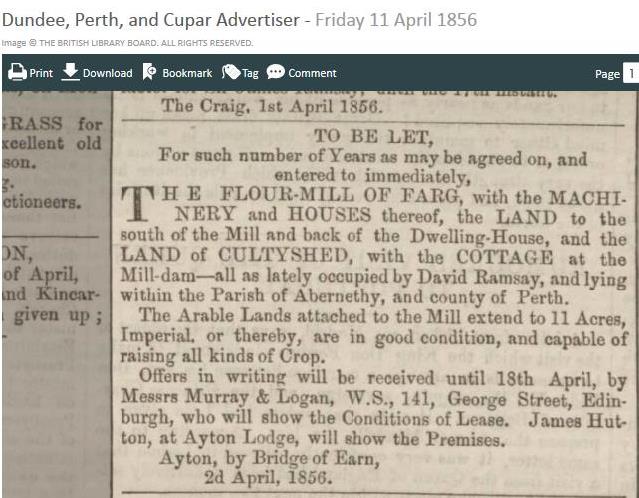 The 1861 census shows David’s occupation as Grain Agent. The family had grown with the birth of two more children; John (my 2x great grandfather), born in 1854 and Peter, born in 1860. This census return shows no servants living with the family, and also shows that the three oldest sons, James, David and William had left the family home. However, as they would have been aged 24, 22 and 14 respectively, this is not surprising. The family’s two remaining daughters – 20 year old Elizabeth and 17 year old Jean (shown as Jane) were living with their parents and working as agricultural labourers.

The 1871 census shows the Ramsay family had moved back to David’s birthplace – Dysart in Fife. The census return for that year shows the family living at Kirky Road, Dysart; the household consisting of David aged 53 – whose occupation was given as carter; Helen; daughter Elizabeth (30) unmarried and an outdoor worker; son Peter (10) a scholar; and James Ramsay, aged 5, a grandson born in Dysart.

James was the illegitimate son of Elizabeth. He was born on 5 June 1865 in Dysart – which suggests that the family had moved from Glenfoot back to Dysart in the early-mid 1860s.

David Skinner Ramsay died of typhoid fever on 12 December 1871, aged 54. I’ve learned a surprising amount about his life; been able to see photos and maps of places he and his family once lived and seen his name in print – albeit in the somewhat tragic circumstances of his bankruptcy.  As always, records can provide an indication of “what” – but not “how” or “why”. How did David go from farm labourer to Maser Miller? How did he come to be bankrupt? Why did the family move to Dysart? These are things I won’t ever know, so I’m content to have learned as much as I did because even this makes me feel closer to these people whose lives were so different to mine, but whose genes and life circumstances contributed in some way to the person that I am.